So last year, I wrote a post talmbout how Spades is not a game. SPADES IS LIFE! That card game is serious business, and unless you’re ready to talk shit, get cussed out and possibly lose valued relationships over it, don’t sit down at that table. YOU AIN’T READY YET!!!

Ennehweighs, someone found my post on Spades and decided to ask me this question that was plaguing them. I decided to post it here, because a lot of Spades enthusiasts read my blog.

“I gotta question from a game of spades that was played the other night. We weren’t sure on what to do and me and my partner had to walk away heated.

We had a boston, called the boston and it was lookin like thats how it was gonna happen.

Sidenote added by Luvvie to explain: A “boston” is when you bid in Spades that you’ll win all the hands of the game. Risky but worth hella points if you accomplish it. And if you don’t, you also lose hella points.

The two we were playing against was a spades vet and a newbie. about 7 or 8 books in I lead with clubs, knowing my partner is already cutting them. Spades vet plays suit, my partner cuts with a 4 of spades, newbie cuts with a 10 of spades… there goes the boston. clubs dont lead for the rest of the hand. last book newbie throws a 9 of clubs.

so what’s the rules on that one? we had the game if she didn’t pull that.

We’ve looked around and nobody has ever heard of this scenario cause nobody we know reneges. I found your blog on spades is life so I figure you got some words on it and I’d appreciate hearin it.

Thanks for writing in, Alex!

Long story short: you and your partner were right. The newbie RENEGED DINNAMUG!!! The fact that she cut your partner’s 4 of spades with a 10 of spades when you led with a club (and she had a club in her hand) was RENEGING! SHE HAD TO PLAY THAT CLUB! Any other suit is reneging.

I’da been TOO pissed once the newbie played a club last. I’da took any books they won and THEN flipped the table over. Shoo…

Anyway, fellow spades enthusiasts and veterans. Am I right? Should Alex been pissed? Would they have run a TRUE Boston if that newbie ain’t renege so horribly? Would y’all have dropkicked this person? CUZ YOU KNOW RENEGING IS NOT A GAME!!!

Edit: Seems that the consensus is that the newbie who reneged is lucky he/she still got all eyebrows intact. These woulda been SOME SNATCHING on that day. That reneging was CLEARLY outta pocket. The table shoulda been punted. 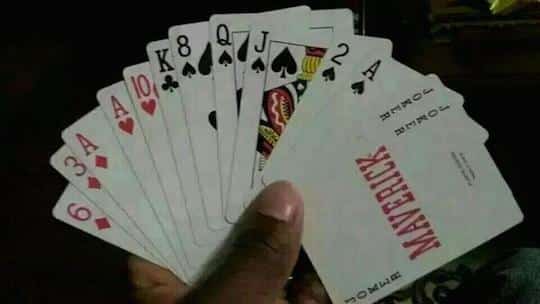