Remember the chaos-filled story that a stripped named Zola tweeted (read: Lessons from Zola’s Story: The Great Saga of Trapping and Mayhem)? Of course you do. The epic tale took us all by storm and the internet spent like a week talking about it, which by today’s standards is a long time on one topic. Celebrities chimed in on how they were hooked and EVERYONE saw the movie potential of this.

Yesterday, it was announced that James Franco is adapting “the Greatest Stripper Saga Ever Tweeted” for the screen. I immediately winced, even from seeing just the headline.

And then I clicked through to have my fears confirmed and I wanted to dropkick every trashcan in a 25 mile radius.

I am not okay with it.

In the Vanity Fair piece I read about it, nowhere was it mentioned if Zola herself will be involved with this production. Same for this Rolling Stone piece. Instead, it’s James who will direct and star in it. The script was written by Andrew Neel and Mike Roberts.

WHAT PART IS ZOLA HERSELF PLAYING IN ALL OF THIS??? Will she be compensated for this? Will she get producer’s credit? Will she be allowed on set as a consultant? None of that was mentioned in the piece.

Just to be sure, I Googled Andrew and Mike and they’re also of course, White Men. What this gives me is PURE COLUMBUSSING VIBES. And if there’s anything white men can do really well, it’s to take the ideas of others, profit from them and then erase the originator. That is their superpower.

Also, finding the tiny role they played in something and making it seem like it matters more than it really did. The story Zola told was about the trapping her and Jessica did, and the only white dude in the story must be who James will be playing. The one who tried to throw himself over the balcony, with his lack of coping skills having ass.

So no, I’m not here for this. A story told by a Black woman is now being directed by a white man and she is barely getting any credit. Her work is being taken on a large scale and it feels like she’s the afterthought in all of it. This is Aziah “Zola” Wells. And I hope she’s getting paid for this film

If I’m wrong here and she’s somehow a major part of James’ project, please let me know. But from the way it is being reported, she isn’t even a footnote. Even THAT is a significant problem.

If it was an oversight to leave her out of the coverage of the Franco news, it’s a massive one. But more likely is that she is not even a part of this. They got all the information they needed to make it happen from her tweets, and cut her out. And since tweets are a public domain, I’m not sure what her rights would be if they did decide to do just that.

BTW, intellectual property lawyers, feel free to chime in on this in the comments. Speaking of, I got my IP attorney Patrice Perkins to write a piece on Hashtags as Intellectual Property: How to Own and Claim Them on my tech blog, Awesomely Techie. Why? Because we give away A LOT of brilliance on Twitter, and even hashtags could potentially be trademarked.

All I do know is that this doesn’t sit well with my spirit. I also wish a Black woman was chosen to direct this.

P.P.S. I woulda written something about Joseph Fiennes playing Michael Jackson but I figured a post with font that is 100 points, and just says FUCK THIS SHIT is not really a post. So I didn’t. So I guess he’s not Columbussing, as much as he’s just another white dude telling a Black woman’s story. Chile, I guess. Good for Zola, though. Get these coins, ma’am! I hope they are plentiful and that they are what she deserves to get. 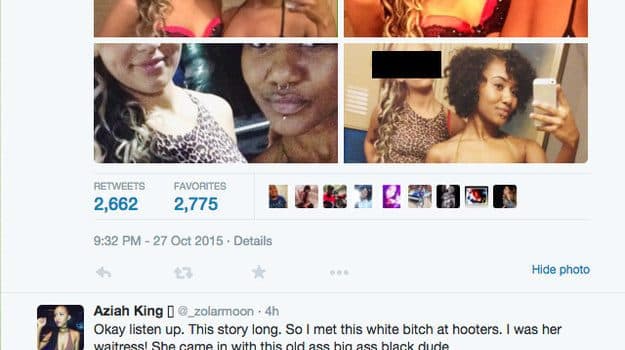