Butter and Bigotry: Paula Deen is Racist and Terrible

Another day, another celebrity being dropkicked off their pedestal. I woke up to find out that Paula Deen, the Matron Saint of Butter and Diabeetus Diet is a grade A racist. This is like finding out that Santa Claus killed the Tooth Fairy. Because she looks like Mrs. Claus and seems like she likes to give the kind of hugs where you get crushed by her bosom in love.

To find out she’s racist and basically an awful person disappoints me much. Well, actually I knew she was a mess when we found out she had THE DIABEETUS all these years and started hawking the medication she takes while creating recipes that clogged our hearts and messed up our sugars.

SHAME ON YOU, PAULA!

I already came up with a name and cover for her biography though (and a cover, because I’m helpful like that): Dear writer who is working on this right now, you’re welcome. Invite me to the book signing.

Antywho, Radar Online reported this story, and it stems from last year’s lawsuit against Paula from one of her former employees. Lisa Jackson, manager of Paula’s restaurant in Savannah, Georgia, claims that she used the N-word and was harassed and assaulted by her brother Bubba. I clearly haven’t been paying attention because this is my first time hearing of the suit.

In a videotaped deposition from May, Paula Deen basically showed her ass, and admitted to being ignorant, racist and just an overall terrible person. Huffington Post has a transcript, and she admitted to using the N-word and then gave them examples of the jokes she made too, talmbout “most jokes are about Jewish people, rednecks, black folks…I can’t determine what offends another person.”

As if that wasn’t bad enough. Paula Deen wanted to hire an all-Black wait staff for some wedding because she got the idea from another event she went (which was clearly run by dreaful bigots too). O_________o

“The whole entire waiter staff was middle-aged black men, and they had on beautiful white jackets with a black bow tie. I mean, it was really impressive. That restaurant represented a certain era in America… after the Civil War, during the Civil War, before the Civil War… It was not only black men, it was black women… I would say they were slaves.”

So let me get this straight. She thought it was cute to get an all-Black wait staff because she wanted to throwback to the good ol’ days around the Civil War?!? Girl WHAT? I don’t e’em know what to say because it’s so offensive that the word offensive is offended. And you know, Black servants in white jackets and bow ties ARE SO DARLING! They go so well with the ambiance. O_____________O. And that “I would say they were slaves” had me so unable to even deal that I had to read the quote 5 times before I even acknowledged it was there.

The woman is so terrible that she should be the villain in a Disney movie. They should write a movie RIGHT NOW where she is the antagonist but give her no credit, because surely this type of terrible deserves to be immortalized with great song and a shadeful sidekick. She can be named Maula Mean. You’re welcome, Disney/Pixar. Just invite me to the premiere.

And today is Juneteenth, Freedom Day. We find out Paula is tryna pretend we are still slaves here to serve her. Can Black folks get a discount on butter for the next 24 hours or nah? I’m asking. For a friend. (-__-)

I should have known Paula Deen was awful all these years. Why else would she have recipes of fried butter to dip butter in butter and garnish with butter? She’s trying to kill us all! That sweet Southern Grandmother schtick. IT’S A WRAP! Well, she’s like the racist Grandmother who still waves the Confederate flag. You know the one that refers to your non-white friends as “the coloreds?” Yes, that one.

So did y’all know that Paula Deen was racist and terrible? Or am I the only person who is surprised?

Edit: Twitter just spent the last 3 hours going IN on Paula Deen with the #PaulasBestDishes hashtag. I created a post that collected some of the best gems. You will cry laughing! 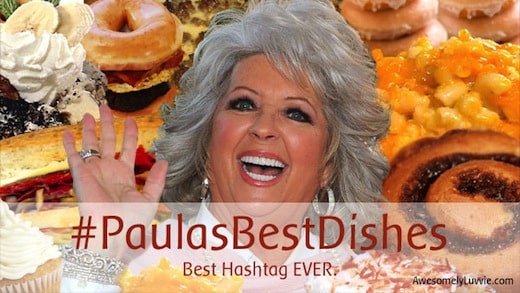 #PaulasBestDishes: The Best Twitter Hashtag in a Long Time

5 Reasons Why I Loved 'Boy Meets World' And Why I'm Excited for 'Girl Meets World!'

#PaulasBestDishes: The Best Twitter Hashtag in a Long Time