See? I wasn’t even gonna post today. Until I saw The Fashion Bomb’s post about a Dutch magazine that has given Rihanna the title of “De Niggabitch.” I wish I was lying.

According to Claire, Jackie said Rihanna’s “ghetto ass” and “street cred” earned her the title of the ultimate  “Niggabitch.” I need Jesus to take the wheel and drive me home safely! THE NERVE! And then I guess folks have been in an uproar so the Editor-in-Chief issued this apology talmbout:

“this should have never happened. Period. While the author meant no harm — the title of the article was intended as a joke — it was a bad joke, to say the least. And that slipped through my, the editor-in-chief’s, fingers. Stupid, painful and sucks for all concerned. The author has been addressed on it, and now I can only ensure that these terms will no longer end up in the magazine. Furthermore I hope that you all believe there was absolutely no racist motive behind the choice of words. It was stupid, it was naive to think that this was an acceptable form of slang — you hear it all the time on TV and radio, then your idea of what is normal apparently shifts — but it was especially misguided: there was no malice behind it. We make our magazine with love, energy and enthusiasm, and it can sometimes happen that someone is out of line. And then you can only do one thing: apologize. And hope that others wish to accept it. From the bottom of my heart I say it again: we never intended to offend anyone. And I mean that.”

Ma’am, we don’t believe you and you need a plethora of more people, but they’re busy dropkicking Jerry Sandusky in the head. First of all, don’t piss on me and say it’s holy water. How could this have “slipped” though ALL the layers and people who look at a magazine before it goes to print? I’m no expert in the world of editorials but even if ONE person saw this magazine before it went to print, then that’s one person too many who didn’t say anything.

Don’t sit up there and try to give a weak excuse like this. The fact that this EVER went from a BAD BAD joke in y’all’s staff meeting to print is proof that this magazine isn’t about that life and is clearly staffed by prejudiced fools. I don’t even understand how they could say it wasn’t meant to offend.

In what world or closet in Narnia does “Niggabitch” ever sound like a compliment? Folks can even argue that the two words that make up that really tacky one are used casually. “Whattup, my nigga?” “My Bitch! HOW YOU LIVING?” That’s not MY style but if that’s your cup of tea and how you relate to your friends, whatevs. I don’t approve. But “WHATTUP MY NIGGABITCH???” sounds like something you say when you wanna pick a fight at the club, when you walk by the dude who stepped on your all white suede Air Force Ones. Those are FIGHTING WORDS. If my mama called me a “Niggabitch” I’d take that to heart.

“Furthermore I hope that you all believe there was absolutely no racist motive behind the choice of words.” Yeah, cuz it’s in the manual that black folks gave white folks. “Feel free to call us niggabitches at leisure.” I didn’t get that memo, Jackie Magazine! I missed it. Let me guess. This magazine has 2 black friends that have come to its house for a party before. Yeah aight.

I need everyone involved with the publication of this magazine to go have SEVERAL seats in a dark corner. It was tacky, insensitive, uncalled for, rude as hell and ridiculous. They got the unmitigated gall to print that, and then wanna issue a weak apology letter that is as effective as Chris Brown’s burnt sienna apology blouse was. Ugh. Now I got an attitude.

Rihanna’s people need to ask for ALL the monies made from this issue and their next 5 or 6. CRANK THAT EMOTIONAL DISTRESS FUND!

So what do y’all think of this? Does Jackie Magazine need to have a seat? No. Let’s change that to how many seats should they have?

Oh and in the words of Awkward Black Girl, “Bitches be tripping.” 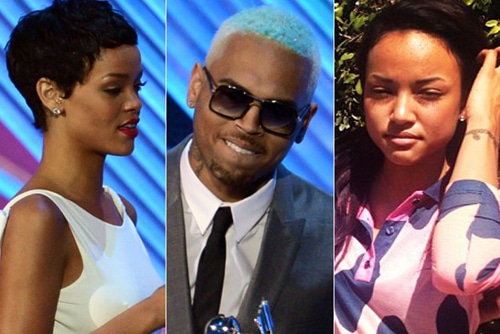 Whose Baptism is This?

The Time Michael Jackson and Eddie Murphy Did a Duet