Y’all know what it is! A double post day is something se’ous around these parts.

Don’t get me wrong. I’m not saying we all gotta dress as the folks in our skintone but let’s be clear. Painting your face Black for Halloween as part of your costume is… well, BLACKFACE. And that is NOT the new Black.

Sarah Silverman twitpiced this the other day: REALLY Sarah??? You got giant balls of steel. Or you're a belligerent dummy. Or both.

Sarah, I ain’t never liked your raggelly ass not one bit. But I didn’t huff at you. Then you go and twitpic this. REALLLLLYYY??? What’s the justification behind this? Clearly you wanted shock value and you got it. As a “comedian,” you’re failing at the funny. You’re trying very hard but still… *crickets*. If the way you want to go about eliciting laughs is through the expense of Black folks, then you’re nothing but an idiot with a mic.

Ugh. I’m tired of all this foolishness. I didn’t even mention the “African Slave” costume. Yes. Really. Shoutout to Afrobella for tweeting it.

I want all these idiots to go away. *kicks sand in their faces* I just wanna mollywop all of these companies and people who buy their awful costumes. I got an attitude.

What do you all think? Is there justification as to why Sarah is rocking black face? Are you as tired of these insensitive ass Halloween costumes as I am?

Update: The “African Slave” costume has been taken off that site. *fist pump* Gooning! Halloween Has a Blackface Issue and It’s a Racism Problem 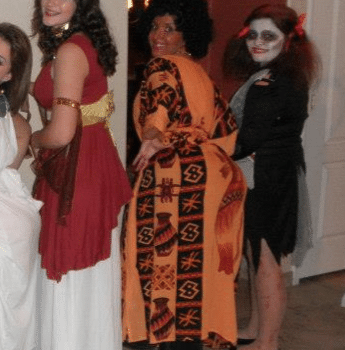 Dear Antoine Dodson, I'm Not Mad At You But...