The Great Candy Debate: Because Sweets Ain’t A Game

Y’all know how seriously we take candy around these parts. There have been many conversations about candy here. Like the fact that yellow starbursts are the ones you give your archnemesis. And how candy corn is the devil.

Well, last year, my friends and I entered into a serious discussion about candies that are clearly here to destroy us. Below is what happened. WHAT TEAM ARE YOU ON? As long as you don’t rep for Black licorice, we gon be alright.

Maiya: Twizzlers taste like the scraps of those old bubble gum wax teeth that were sold during Halloween.

Luvvie: I just tasted it in my mouth. That’s how vivid that memory is. lol

Britni: Twizzlers are an abomination. Straight up. Luvvie: I can’t even defend Twizzlers, even though I do partake in some twizzle snacking from time to time. I just can’t defend it. It does taste like red-flavored wax. Yes, red is a flavor.

Britni: No self-respecting woman from California can ever condone consuming Twizzlers. My kid picked up a pack of Twizzlers at 7-11 once and I almost slapped them out of his hand. I was like, YO, WE’RE FROM LOS ANGELES! We don’t eat that ish.

Scott: I’d rather eat a cherry Chapstick than a Twizzler.

Maiya: Twizzlers are so terrible, you can’t even tell when they go bad. Somebody offered me one of the jelly filled kind once and I threatened their life before I realized what I was saying.

Da: Twizzlers do NOT taste the way they smell..if they did, I’d love them.

Maiya: I feel like Twizzlers are a fusion food of sort. Like they may have started off being marketed as edible birthday candles, but the jerks that produce them just stopped telling folks to light those suckas up.

Karima: Just because Twizzlers are Red, don’t make them right. If you need to eat Red, have some Swedish Fish. Keep your mind and your life right.

Luvvie: SWEDISH FISH?!?! Them joints taste like everlasting tapioca balls. They get all stuck in your teeth and you gotta chew one for 5 minutes. NO THANK YOU! Swedish fish is what happened when someone’s cherry gum didn’t GUM alla way over. I just threw a pillow at the thought of that failed experiment that people love. This is rubber. You cannot tell me otherwise.

Luvvie: Mike & Ikes taste like Skittles that failed their mission. That is another candy that your dentist will hate you for. Or they might love you because you will fund their next vacation with treatments you need. Ol’ stick to the middle of every tooth ass clingy ass candy. Sabotage, man. They don’t even taste good enough to risk that. Mike & Ike’s are the Drake of candy.

Maiya: Mike & Ike’s are codependent as hell. Be all on your teeth like, “Don’t ever leave me, ok?”

Luvvie: Black licorice tastes like despair, disappointment and unrealized potential. Anyone who eats that cannot be trusted. #RemoveThemFromShelvesReedemerofSins Maiya: OMG! If you eat black licorice willingly, you have no soul. Like you totally pawned it at Beelzebub’s Bazaar and lost the claim ticket.

Britni: Dude, I met somebody who said they preferred black licorice. I got the hell away from them QUICKLY. They were clearly up to no good.

Luvvie: Of ALL things in this glorious world to love… BLACK LICORICE?!? That person doesn’t wanna win at anything. They must not like to have nice things.

Britni: Man, people who enjoy Twizzlers are misguided souls, but people who love black licorice will Hannibal Lector your soul.

Britni: Candy Corn is the Black Israelites of Halloween. They so loud & proud and militant.

Luvvie: hahahahaha omg Britni. And wrong. So they’re the Westboro Baptist of Candy?

Maiya: Candy corn be trying to recruit on Crenshaw in front of Louisiana Fried Chicken with pamphlets and a bullhorn. Britni: Candy Corn be dressed like leftover Jedi Knights come November 1. Just looking all lost and out of place.

Kell: I say death to all these gummy candies that are bad jelly beans in disguise. It’s like they all wanted to go to Jelly Belly University, but didn’t get accepted so they are graduates of ITT Tech Candy Institute.

Although I indulge in Hot Tamales from time to time. I can’t be around my husband because cinnamon candy and gum makes him want to kick puppies. Plus, I can only stand to burn my taste buds off once a year. I mean, really–a box of 8,000 pieces only costs a dollar. I’m not sure we’re even supposed to be ingesting them.

Luvvie: LOLLLL “ITT Tech Candy Institute.” Everest Sweets College dropouts, Kell. But what I hate with the intensity of 1,000 African suns is those Peeps that are around Easter. I CANNOT DEAL WITH THAT INDECISIVE MARSHMALLOW TRAGEDY.

Maiya: Peeps are marshmallows coated in sugar. Who ever thought that was a good IDEA?!? I remember trying them when I was younger and making the sour beer face because all I tasted was sweetened dye. I’m frowning now.

Luvvie: OMG cinnamon gum is a weapon of taste buds destruction. When the slow burn starts on your tongue, you just start questioning where you went wrong in life and decision-making. It’s offensive. Because who needs jabanero pepper when you can just burn the roof of your mouth with this?

Britni: Cinnamon gum is the weapon of choice of church grannies to get you to STFU during the sermon.

Kell: I hate cinnamon gum. SO. MUCH. Like, hot tamales fade. That cinnamon gum cloaks your mouth with a sickly sweet smell *gag*

Da: Cinnamon Big Red might as well be wasabi and ginger strips in foil.

Britni: Airheads, Laffy Taffy, and all that other crap are weapons of mass destruction for your teeth.

Luvvie: Now and Laters too. But I loved them fiercely. i just dont know if my adult teeth can hang Who needs teeth attached to their gums?

Britni: BTW: Why are they called now AND laters? Don’t nobody say that properly. Just “Now Laters.”

Luvvie: Tell the truth and shame the devil, Britni. Them things will pull out your teeth. NAHLADUHS

Da: Okay so growing up in the hood, i never knew they were called NOW or LATERS cause i never saw them in a package, just individually wrapped when my friends would say “aye you want some Annihilators?”

Kell: You know when you find that now & later in your bag that’s been there for months, and it’s kinda soft but still kinda hard? And it’s the best fucking thing on the planet? And you hold onto it until it is a tiny dagger slicing your tongue and the roof of your mouth? No? Just me? Oh.

Maiya: Now & Laters were the ultimate test of patience and fortitude. There was always that point where you weigh the pros & cons of chewing it or sucking on it. Takes to long to eat sucking on it, but chewing on it might give you lockjaw. The ultimate struggle…

Kell: Can we talk about how blow-pops are for when you want your entire mouth to hate you?

Luvvie: OMG BLOW POPS!!! They get those cracks in them and cut the hell out the roof of your mouth. Mouth be blue and hurting. It was my daily ritual in 8th grade. RIP the roof of your mouth.

Kell: There’s a certain point where the blow-pop itself becomes a scalpel and slices the roof and the tongue at the SAME. TIME.

Maiya: Blow pops are for masochists

Britni:  I always wanted to know why the gum in the Blow Pop was so subpar. Like 5 chews and all the flavor was gone. WOMP! You know what’s the swindle? Those Tootsie pop suckers masquerading as Blow Pops.

Maiya:  I used to be HOT if I got a tootsie roll center instead of a blow pop. Whose bright ass idea was it to put a candy shell over chocolate taffy?? Probably that meddling ass owl.

This went on and on for another 30 minutes. The fact that we really spent this much time breaking down candy like this is how I know I have awesome friends. 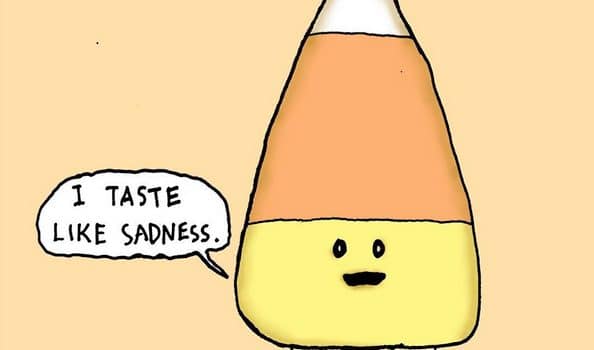 About Crowdfunding, How It's Jumped the Shark and Why I Can't Promote Your Campaign